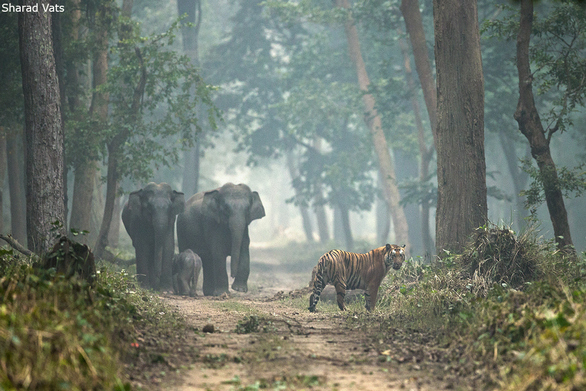 It was a moment I had never witnessed over the last 25 years of safaris in IndianNationalParks, and one that I probably won’t, hereafter. During my the latter part of my visit to the Sonaripur range of DudhwaNationalPark my focus was on clicking #elephants, who seemed to have eluded me for some reason. As my last safari neared its end, I thought I saw elephants, but did not say a word fearing that the guide and driver would be highly amused by my already hallucinatory elephant imaginations. But as we drew closer, my guide Naseem whispered, “elephants”; and indeed at a distance, right on the track, there were two elephants facing us!

I picked up my camera, placed it on the bean bag and steadied myself to shoot. Light was un-cooperative  and the mist did not help either. But before I could shoot anything, staring hard through the binoculars, Naseem hissed again, “There is a tiger on the road!” Not visible to my naked eyes, I zoomed in through my lens and sure enough, spotted a crouching tiger. It was no wonder then that the two elephants, with a calf in between them, were standing still.

As we drove slightly closer, the tiger stood up and began to stalk the elephants, his sight trained on the calf. The unhappy mother trumpeted, her voice tearing the jungle apart. The mother elephant took a step towards the tiger, but the king, undeterred and unfazed, stood his ground. My mind began to wander. What if there are other elephants in the surrounding tall grasses? What if they charge to help the mother in despair? What if they charge towards us, thinking that the mother is upset by our presence?